STRATEGIC ASPECTS OF THIRD STREAM ACTIVITIES IN GLOBAL HIGHER EDUCATION: CASE STUDY OF 5 UNIVERSITIES IN THE NORTH EAST OF ENGLAND

Third stream activities are vital for Global Higher Education, with reciprocal benefits for both International Higher Education and the global business community including key impacts/benefits. Although evidence implies that Universities are actively embedding and integrating third stream alongside first and second stream curriculum activities, the paper would challenge such rhetoric and is far from the truth. The paper reports a study in the North East of England, involving all 5 universities. The results synthesized validate this stance and with the aid of tangible evidence further implies that there is in fact a clear miss-match of perceptions and a situation in which many Universities are clearly struggling to demonstrate tangible internal and external third stream key performance indicators. Empirical research conducted in 2012, discovered executive and procedural failings that clearly stifled academics in actively becoming involved participants in external activities. The paper concludes in presenting both an operational and strategic theoretical framework to embed ‘Third Steam’ activities within Higher Education and its effective integration within ‘First and Second Stream’ initiatives.

Third stream activities, concerned with the generation use, application and exploitation of knowledge and other university capabilities outside academic environments (Thune, 2007), are vital to the success of the HE sector. Universities are required to add both direct and indirect value to social and economic development (Cable et al., 2011), with impact studies monitoring the sector’s contribution as part of the overall excellence profile for the 2014 Research Excellence Framework (HEFCE, 2012).

The Russell Report (2002) and the Lambert Review (2003) emphasised that Third Stream activities should be seen as a core activity of Higher Educational Institutes. Many University Executives have responded to government initiatives and focus by establishing Third Stream policies and infrastructures within their institutes. Prima facie evidence would suggest that we are actively embedding and integrating third stream alongside first and second stream activities. However, a decade later, Wilson’s Review (2012) provides troublesome reading, for whilst it identifies good practices and exemplary approaches, it highlights the continuing low take-up and patchy provision of Third Stream activity along with 30 recommendations for improvement. HE collaboration with SMEs has been identified as critical for future growth (EU documentation, TSB documentation, Strategy for growth 2011), with significant UK and EU funding initiatives aiming to stimulate cooperation.

So, if Third Stream activities are so essential, as recognized by the government, industry and the HEI executives, why then aren’t we seeing considerable growth in Third Stream activity to ameliorate the loss of income from the first and second streams in the HE sector and to meet the economic imperative? This paper discusses a study that is part of a wider project aiming to identify an effective approach to growing Third Stream activity in Higher Education. The results presented here highlight academics’ perceived priority of the various streams of academic activity in their institutions and their limited involvement in, and awareness of, Third Stream activities.

163 academics from the Business Schools of the 5 North Eastern Universities, 2 Russell group (Durham, Newcastle) and 3 post-92s (Northumbria, Sunderland and Teesside) completed an online 20-question questionnaire in February 2012. Participants completed questions on the prioritization of the three streams of activity and on awareness and perceptions of Third Stream activity, policy and infrastructure at their institutions.

59% of the sample were Lecturers/Senior Lecturers, 17% were Professors/Readers and 24% were academic managers (e.g. Associate Deans, Head of Departments, Principal Lecturers, etc.).

Academics were asked to rate the priority that each of the three streams of activity have at their institution (1 = lowest rating, 10 = highest rating). Paired samples t-tests were used to calculate whether there were significant differences in the mean scores assigned to research vs. teaching, research vs. Third Stream activity, teaching vs. research and teaching vs. Third Stream activity. This was significant for research and teaching as priorities (t (162) = -4.01, two-tailed p < .001), indicating that teaching (M = 7.66) was given a higher overall mean priority rating compared to research (M = 6.45).

No significant differences were revealed between academic position and priority ratings for teaching, research or Third Stream activities with general agreement across all levels on prioritization.

Over 60% of academics had not participated in any Third Stream activities. A third of the sample had been doing some consultancy activities for 12 months or more. No significant association was found between length of participation in third stream activities and University type (Russell Gp vs. Post 92) (X2 (2) = 4.67, p = .10). However, the percentages indicate that more Russell Group individuals (74.5%) had never participated in activities compared to Post-92 (57.1%).

Further analysis of the results helped construct a rich picture analysis, (See figure 1) and in doing so synthesized nine core drivers, (See figure 2), which it is felt , that if addressed, would significantly dissipate those barriers raised by respondents in the research exercise. Thus aiming to counteract the perceived perception that third stream is a ‘bolt on exercise’.

With innovation and knowledge seen as fundamental to economic growth and Universities increasingly expected to be the primary provider or at least a significant contributor, Third Stream activity is key, however, the challenges are significant. Our study clearly identifies that academics do not perceive Third Stream to be of the same priority as teaching or research. And this difference in prioritization is vast, with research and teaching both being high priority and Third Stream at best semi-priority for post-92s and of low priority for the Russell Group universities.

The response to engaging Higher Education with business has focused on senior management and high level policy, supported through the implementation of high quality infrastructure and support services. However, the product of the University is the academics themselves. Knowledge and innovation is expressed as artifacts and outputs, however, it is embedded in us. Unlike research and teaching, many Universities did not previously have third stream activity as a core function within their mission statements (Ramos-Vielba, 2009). Further, as most academics entered higher education because of first and/or second stream interests, even where the University has changed the mission and established infrastructure this may not have filtered through to faculty, with corresponding low levels of activity and growth in Third Stream activities in almost all institutions [Hoskins, 2011].

At the University of Sunderland the author has developed an operational theoretical framework named the ‘Business Clinic’ as noted in figure 3. The Business Clinic offers a viable ten step procedure whereby external enquiries can be channeled into three third stream initiatives such as first stream teaching, second stream research and third stream external engagement gateways. The Business Clinic has proven both successful and attracted further interest via the academic and business community in the formal invitation to attend research conferences, business networking forums and overseas Universities such as the Meiji University in Japan.

Higher Education has always evolved and reinforced its presence as a major pillar in society or what is now referred to as the ‘knowledge economy’. The wheels of change were historically driven or paced by universities themselves. However, as with all public sectors both the government of the day, business and public opinion have started to question their autonomous role. 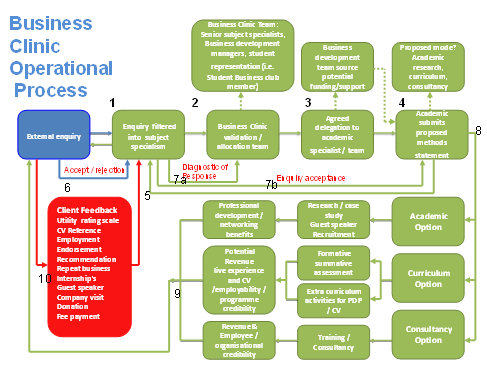 We face a current and continued situation in which Higher Education is in the ‘lime light’ of scrutiny and fuelled by the economic recession. The academic community has in many cases struggled to adapt to what many feel is the commercialisation of their profession. However, with professionalism comes commitment and academics have shown that they are willing in the main to adapt. However, research reveals many academics feel that their institutes are failing to provide the necessary policies, infrastructure and management styles to foster a proactive third stream culture.

The paper concludes by clustering respondents’ feedback into nine key challenges that need to be addressed and a route map / business clinic to enhance the adoption of third stream activities. It is anticipated that readers can relate to both the feedback and proposed solutions. Hopefully, the paper will act as a catalyst for academics to lobby decision makers to further validate and explore workable solutions within their own institutions.