Master  from the University of Aegean.

Master of International Law (L.L.M) from the University of Teramo, Italy

Cultural and experiential routes are an opportunity to highlight the historical events of an area, often through a new perspective. This work focuses on the city of Rome and aims to highlight its timeless monuments and the points of gastronomic everyday life, as important factors for the entertainment of visitors. In addition to the tour suggestions, it is accompanied by research on the traffic of some special places in the city, based on the tripadvisor page.

1  CULTURE AND TOURISM IN A SUSTAINABLE COEXISTENCE

According to Kokkosi and Charta (2011), cultural tourism has as its main motivation the contact with the cultural heritage in the cities and in the countryside. Manola (2019), completes another motivation, that of the basic human need to experience emotions and believes that this explains the existence of unique experience activities through which emotional loads are developed, due to personal experiences and drastic changes in everyday life. So people who travel on cultural paths choose to come in contact with elements such as arts, handicrafts or traditional products, mentality, customs and traditions, architecture of buildings and spaces, various cultural and sports venues, or religious or gastronomic destinations (Richards, 2007 cit. Papageorgiou & Gandouna, 2012).

The Council of Europe, in 1987, defined the Cultural Routes as a journey through space and time that shows that a country's heritage contributes to the creation of a common and vibrant European culture.

The enlarged partial agreement, signed by 26 member states, includes more than 30 cultural routes with a variety of topics, such as pilgrimage, history, archeology, art, etc.

The Lisbon Treaty[1] entered into force at the end of 2009. It helped to adopt complementary measures to national tourism policies, and in particular to the development of thematic cultural tourism routes as a way of promoting the competitiveness and diversity of the tourism product.

According to Karavasilis and Mikelakis (1999), itineraries should be based on planning a course to visit natural and cultural heritage sites, for example thematic itineraries that include a specific element, such as museums or buildings of an era or historical routes for elements of historical interest or even mixed routes that include elements of the overall identity of a site of both material and intangible cultural interest. We will try to explore such a course in Rome.

Rome is the capital of the Italian Republic. It was founded according to tradition on April 21, 753 BC, but according to historians, much earlier. During the three millennia of its history it has been the center of one of the most important ancient civilizations, which has left its mark on multiple levels of world civilization. Place of origin of the Latin language that has influenced and greatly influences the languages ​​of the modern world and even tourism since in the recent research (Manola and Papani cit. Manola & Hatzitheodorou, 2020a) eighty percent (80%) of the current Italian orthology consists of words that have Italian roots. Heart of Catholic Christianity, as it is the only city in the world that hosts an entire state, the Vatican City. After all, the presence of the Pope in the city was the main reason that after the fall of the Roman Empire, Rome returned to the forefront as a significant urban center. The seven hills of the city today are visible only from Quirinale Square, the highest hill of all. In modern times it became the capital of Italy again, after its unification in 1870, and officially with the Patti Lateranensi,[2] in 1929. Today it is also the seat of the European Economic Community and Euratom, it also hosts the headquarters of three United Nations organizations: the Organization Food and Agriculture Organization (FAO), the International Fund for Agricultural Development (IFAD) and the World Food Program (WFP). Unesco[3] has included its historic center bordered by the Aurelian Walls in the World Heritage List.

Rome, known by the nickname "Eternal City" due to its long history, includes a large number of monuments from different eras. Some of the most important points of interest, outside the Vatican City, are presented in the following "table 1" grouped, based on its central neighborhoods.

Table 1  - “Sightseeing in the central neighborhoods of Rome”

Search for comments in the points presented on pages are separated from the available data by visitors as they require to browse, with the exception of the Vatican, separating the tags that present the various that they present.

4 / The gastronomic suggestions include an additional separation in the initial distribution of the page and this emphasizes the special importance given to the specific tourist activity. So there are the following sub-categories: Options of the community which in turn is divided into proposals for the best 10 pasta places (characterized as culture trip) / 24 hours delicious (with the indication that there is also the TripSavvy application) / and every pasta dish (marked eater) - luxury restaurants-local cuisine-average prices-affordable-dine with a local - breakfast-special offers.

The analysis and the engagement of the website with the gastronomy of the city comes to emphasize the great importance that the people in charge give for the development of the specific field that as art and science determines the human nutrition and has possibilities for further development.

Gastronomy hides the essence of a place, because it transforms its raw materials into derivatives that include the view of the inhabitants for the taste. It can be considered as a subset of culture, a culture with an axis oriented to actions and knowledge of everyday life and in this case, a view of the people of an area for a form of happiness, food.

Italian cuisine is delicious and relies on simplicity and fresh local produce. In Rome, as in all of Italy, food is a ritual. The recipes usually come from previous generations and are completely identical to their regions of origin. But today the recipes known only to the cooks of a region are now world famous. Cheeses and wines with variations are a key part of the kitchen, often not designated as Controlled Protection Origin (DOC). Also an important chapter of Italian gastronomy are ice cream and coffee.

On a typical day the Italian eats breakfast, the meal which usually consists of four dishes (appetizer, first, second course and dessert), the evening and tithing or afternoon as snacks. Drinks, especially wines and liqueurs are an essential accompaniment to meals.

• Trattoria : with a light atmosphere and traditional cuisine,

• Osteria: with a relaxed atmosphere and homemade food,

• Enoteca: which features wine products, introduces the customer to the wine culture, and often serves small snacks to accompany the wines. They can be characterized as tasting places.

The logic of the food ritual is of course not only a privilege of Rome but also of other Italian cities, such as Bologna, Naples or Venice where the famous Bacaro, the typical small restaurants, serve to tourists through food and drink. a delicious experience of Venetian life.

However, focusing on Rome and researching the possibilities of increasing the number of visitors based on the tasting experience, we observe that on the tripadvisor website [3/11/2020] 1,548 tours are proposed, of which 472 are related to food and drink and especially of these 180 specialize in wine tours. 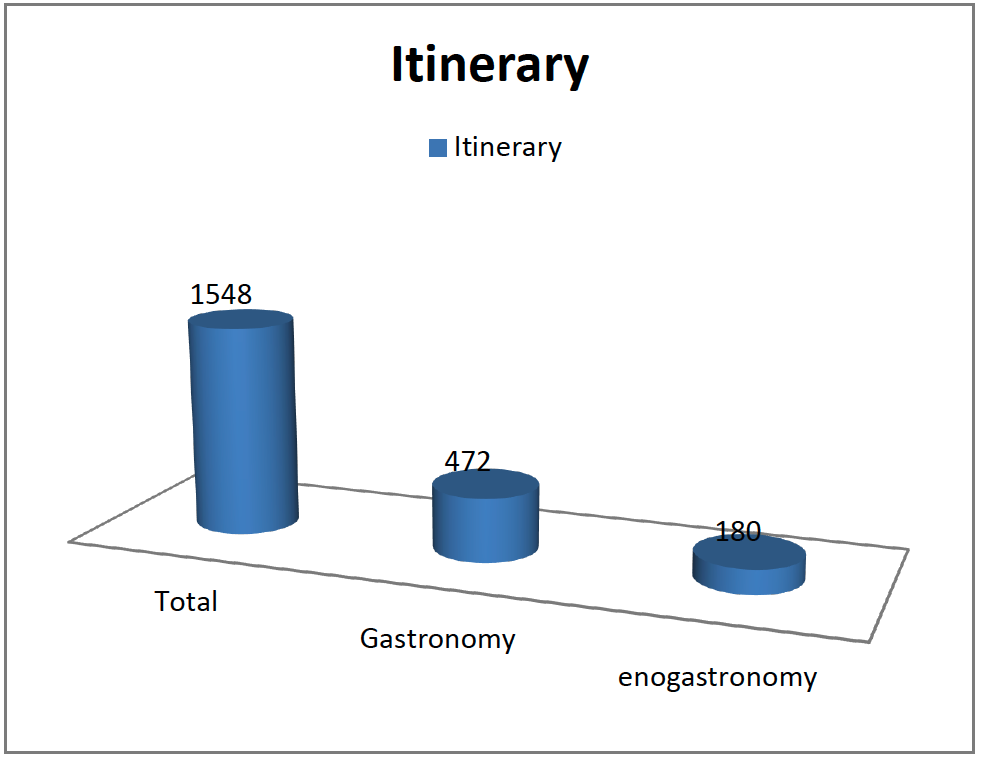 For the first 10 restaurants that appear on the website[4] (but they are not the most visited) there are a total of 5,089 reviews of which only 161 do not declare the services offered as excellent, which indicates the great response that gastronomy enjoys as a tourist product even in places that are not the first in order but which also gives a better idea of the average service. 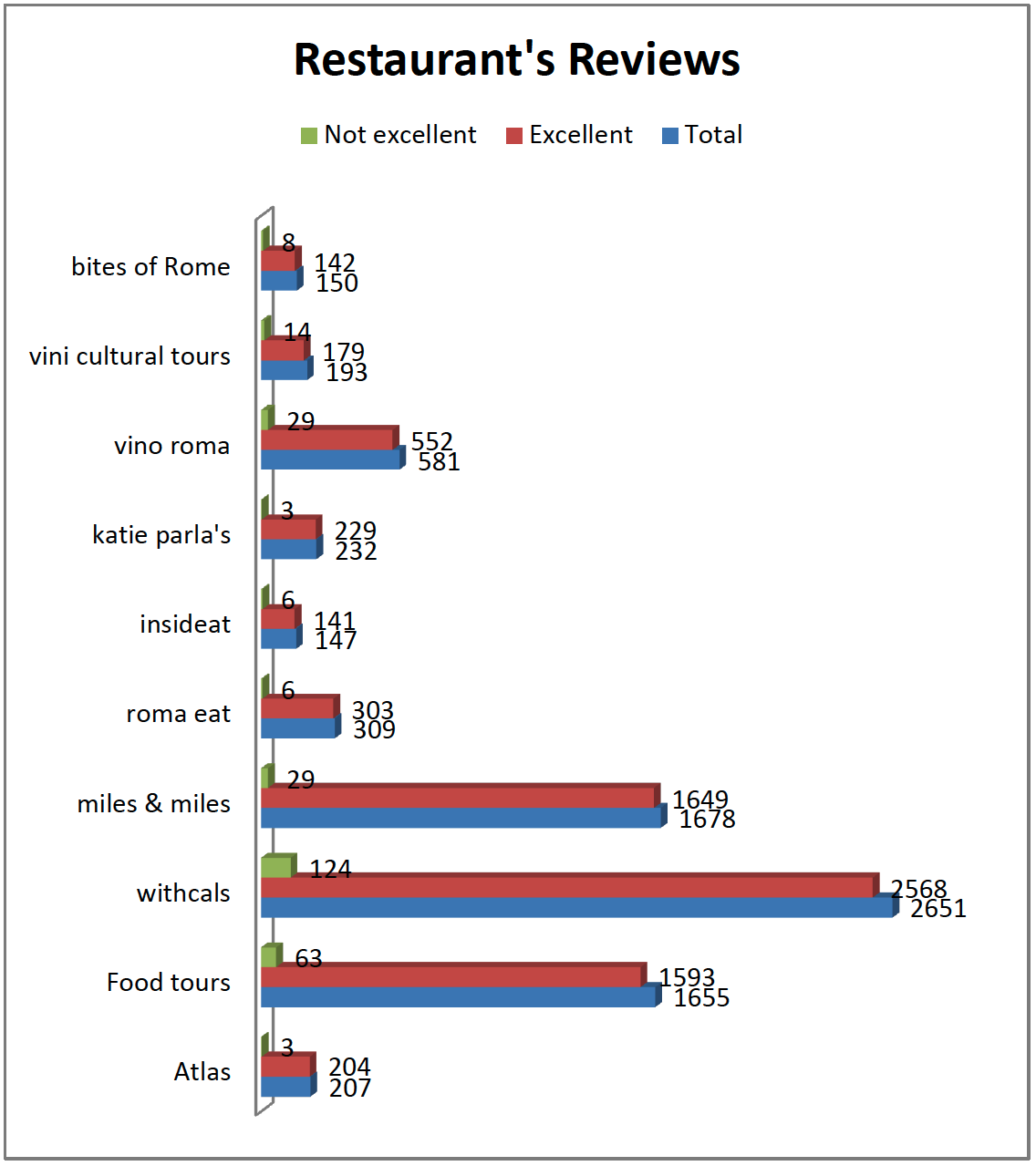 But let's look in detail at the areas that are famous for catering in the city and specifically Trastevere, EUR and Testaccio. Gathered reviews for the top 10 restaurants of all types of website with Italian food, which are characterized as follows:

Figure 3 - Reviews for the top 10 restaurants

The tours that they declare to include in their activities and wine tasting routes cover a small part of the market, reach as we saw in table 2, the number of 180 tours. However, as shown in the table below, they have a special dynamic and are characterized by a positive sign from the visitors of the city. 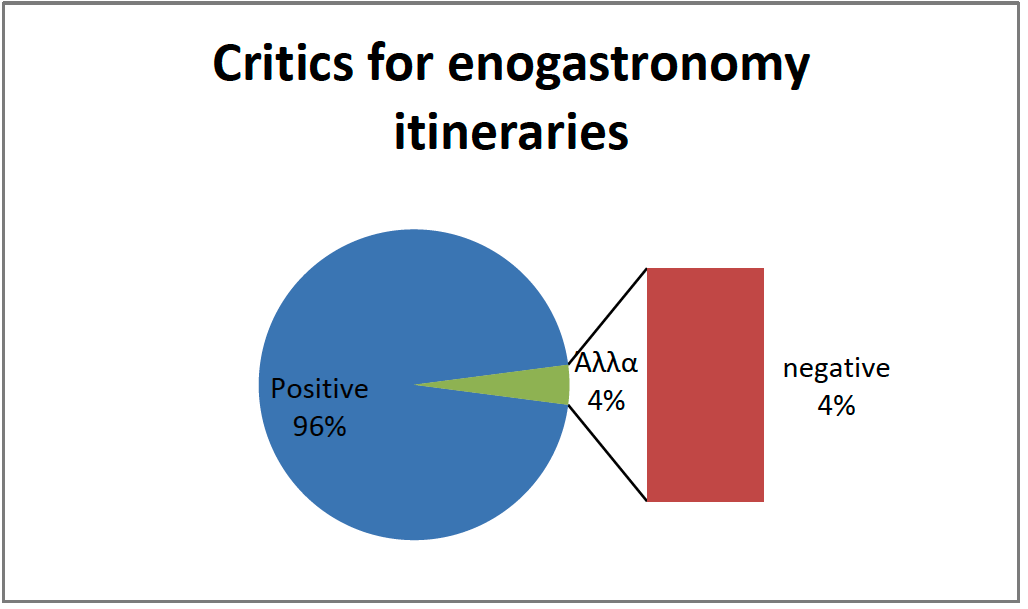 As can be seen from the table above, from a total of 1241 reviews the vast majority obtained a positive view of the wine tasting activity.

The article examines cultural routes focusing on the city of Rome. In particular, the categories were mentioned based on their character and scale and proposals for routes were formulated based on the elements of both cultural and intangible heritage.

The elements of cultural heritage that a traveler encounters in Rome are invaluable and their networking through cultural routes has given them the added advantage of being treated as a whole, but it does not deprive them of their uniqueness.

Rome is a great proof of the success of the combination of tourism and culture and can teach the mild form of development through this manifestation of culture that has to do with gastronomy and especially with wine, can be an example to be imitated for many areas of Greece such as for example Crete or Macedonia. A country that gave birth to Dionysus, who praised the wine, and cuisine is a worldwide health food model and source of longevity.

The selection of points of special interest and their inclusion in the tours, as mentioned earlier, would form new points of interest where experiential activities could be developed that would be combined with art exhibitions that would have a specific theme or workshops, lectures and artistic events.

From the above it seems that cultural tourism is not limited to the trivial but develops areas even outside the classic routes with points of particular interest and can be considered as one of the positive signs of this development the creation of jobs even in areas beyond the usual of the industry.

Papageorgiou, M. & Gandouna, E.(2012). Cultural tourism and cultural routes: Planning directions at the local level through the case of the municipality of Elassona. Proceedings of the 3rd Panhellenic Conference on Urban Planning, Spatial Planning and Regional Development. Volos: University Publications of Thessaly.

Karavasili, M. & Mikelakis, E. (1999). Cultural Routes: towards an interpretation of the "cultural

landscape" with a development perspective. Archeology and the Arts, Issue 71, 82-86.

[2]           The Lateran Treaty is considered to be the regulating factor in the relations between the Italian State and the Holy See. It was signed in 1929 between Pope Pius XI and Benito Mussolini, and in order to resolve the dispute with the Italian state, the Vatican City was recognized as an independent state.