With the distinction of the Alto Douro Wine Region to World Heritage Site in the category of Cultural Landscape, in December 2001, the pristine nature was echoed internationally, reaching new visibility. This is not only an amazing space where are produce excellent wines, notably the Port Wine, but also a natural Heritage, architectural, socio-cultural, gastronomic and wine space that urges boost. The heritage, its potential as a tourist resource, needs to be explained and / or interpreted, bailing up the model of ubiquitous computing - mobile phone, smart phone or tablet. These devices are embedded in the people daily routines, and represent today’s most common and widely used technology. This growing technological phenomenon, aims to break with the traditional model, centered on the personal computer, giving users the ability to interact with the digital world through the elements that surround the user environment, and using multiple devices. Because all the information is reproduced in multiple atoms, becomes fundamental rethink the classical forms to support information needs that tourists have on the trip - guided tours and self-guided, "living history" performances / plays, forums / discussions, pamphlets, interpretive panels, signage, among others, as well as how actors tourist must interact with these.

This paper analyzes the main problems and needs that tourism entities have in disseminating information, and proposes a new approach of interaction between the tourist and the information and services within tourism. The proposed approach presents a Technologic Framework, based on the principle of ubiquity and implementing the concept of smart spaces supported by contextualization mechanisms.

Tilden (1957) was one of the first to address the issue of heritage interpretation, ensnaring the concept to the visitor experience. Despite the ambiguity of the term in 1977 (Tilden, 1957) a new approach to the maintained concept subordinate to interpret as a vehicle for decoding order, aided by a set of tools and techniques. Thus, "an educational activity Which AIMS to reveal meanings and relationships through the use of original objects, by firsthand experience, and by illustrative media rather than simply to communicate communication factual information."

According to the National Association for Interpretation (Graham, 2005), the "Interpretation is a communication process that forges emotional and intellectual connections between the interests of the audience and the Inherent meanings in the resource."

Despite the progress that the term has in recent decades, it is urgent to make the information more quickly and the next visitor, meeting the requirements established as the National Strategic Plan for Tourism (2007), which mandates the creation of itineraries to showcase heritage historical, cultural and religious regions. It is therefore necessary to provide a wide range of information about places, enabling the visitor knowledge and discipline as well as regular visits flows. But, this information will be tailored to the needs of your visitors?

In the current context, the interpretation techniques most commonly used are: the interpretation custom, which establishes a close relationship between the one who provides interpretation and visitant, e.g. guided tours, "living history" re-enactments / plays, forums / discussions. This technique has the advantage of adapting to the needs of each group, but represents costs for institutions, especially in human resources, technical and impersonal, which encompasses various practices, such as the internet and new technologies, the audiovisual media, the pamphlets and interpretive panels, signage, the self-guided tours, among others. This technique meets the new premises of public policy, presenting several advantages, including a very low cost per visitor.

Public policies have been focusing increasingly on reducing the human and material resources, paving the way for other forms, less expensive, and disclosure of assets. In addition, tourist information offices and / or educational services / interpretative provided by specialized personnel often depend, local, obeying, so a rigid schedule of operation being closed after 5:30 pm or 6:00 pm and / or closed during the weekend.

Given the obstacles mentioned here, we are facing a new challenge and an opportunity.

2 THE ROLE OF UBIQUITY AND CONTEXTUALIZATION

If a few years ago, a tourist to choose a touristic destination consulted prospectus in a travel agency, nowadays the same is not true. A tourist of today wants more. Want to be able to search all over the target region before choose to visit it. Tourist wants to have real time support when he is visiting the place, and also want easily to share is experiences with other users with the assurance that the information available after the visit will be useful to those who plan to go to the same place. These data justify the introduction of new information systems to support the tourists and tourism (Brown & Chalmers, 2003). With the advent of the Internet some of these services were extended to customers, but according to Watson et al. (2004) there are three fundamental problems with existing systems: first, tourists before the trip has a lot of information, which will have to filter, and will have to spend too much time to find useful information. Secondly there are few systems that support mobility of tourists, and finally after the journey of the outcome of experiments are not easily shared.

Although the concept of ubiquitous computing is not new, that does not need a computer to access the information (Weiser, 1991) and even the devices evolution might give the impression that they are "invisible" and are anywhere (Watson, et al., 2002) we verified that the development in the application of tourist support for mobile devices is imperative, even with the new functionalities of the phone, that slowly are becoming present in all models released. The existence of integrated camera and Java applications support are two examples of features considered common in a current phone. Today technologies such as Global Positioning System (GPS), Wireless Local Area Network (WLAN), or Bluetooth are already easily found on a mobile device while the technology Near Field Communication (NFC) is beginning to appear.

Assert that the information and services are ubiquitous, means that they are available anywhere and anytime. The development of mobile devices to access the wireless network, along with lower costs of network access traffic data, as well as the proliferation of free wireless hotspots, makes the use of these devices access tools increasingly common and attractive content that proliferate on the Internet. The model of ubiquitous computing aims to break with the traditional model centered on the PC, and to give users the ability to interact with the digital world through the elements of the environment surrounding the user at any time and using multiple devices (Han, 2004; Saha, 2005; Hernandez, 2009).

Mobile devices such as mobile phones, smart phones or tablets, are incorporated into the daily routines of people and represent the most common and widely used technology today. Studies have shown that, in Portugal, the ratio of mobile phone / person far exceeds 100% (ICP ANACOM, 2012). As a general rule, "all people have at least one mobile device." This wide availability of mobile devices is the ideal tool for interaction between the user and the information and services on-demand. This idea is reinforced by the current trends in the evolution of mobile devices, which suggests a huge potential for development as they incorporate new technological capabilities in mobile devices (e.g. GPS, NFC, and WIFI).

Allied to mobile devices are today, new technologies that allow the contextualization and the bridge between the physical and digital. GPS combined with mechanisms such as barcodes, multi-dimensional codes such as QR Code and radio frequency tags such as NFC allows associating real-world objects to a given element to represent and contextualize.

An approach based on contextual and ubiquitous, it is demonstrated particularly interesting in promoting tourism and in particular in the context of the visit, where tourists more need to be helped in order to understand and have an answer to their expectations. For the tourist can get information and access to services during the visit is key to answer the need for mobility that the tourist has the means to access the information it provides, and the time / availability that it is willing to consume, to get the information they want.

The technical characteristics of current mobile devices, constitutes them today in devices that, among other capabilities includes: a processing capacity reasonably permanent connectivity, camera and the ability to run external applications to its core - operating system installed root - (e.g. Java ME, Google Android or Apple iOS). These capabilities allow now look at him as a very important technological device in ubiquitous architectures. Their decoding capabilities contextualization elements such as NFC tags, QR Code tags (with the camera) or GPS, make mobile devices that proliferate the overwhelming part of the population, a tool that allows you to support an architecture that aimed at providing, ubiquitous information and services in context, as illustrated in figure 1.

Applications for helping tourists “during the trip”, when exists, are mainly focused in a single indexing-technology. Although sometimes one unique contextualization-mechanism can meet the necessary requirements to help tourists, when we only have one technology available, we are limiting the users to problematic situations such: lack of compatible devices with the technology used, or, situations where this technology does not respond in the best way at the requested. 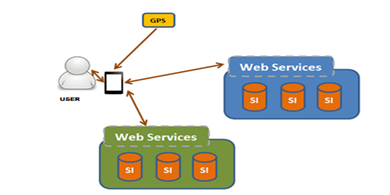 Figure 1: Access to information and services through mobile devices

In the case of tourism there are specific situations where we have to use different technologies to satisfy the tourists’ needs. As an example: we can have GPS technology that is very good at tracking and helpful for the establishment of paths and trails for tourists but has an error in the approximation at distances of less than one meter. Also, if the tourist is in a place with many points of interest distancing between them less than one meter of each other and if the technology used to interact with tourists is the GPS, it’s impossible identify which object is to be seen at any given time. 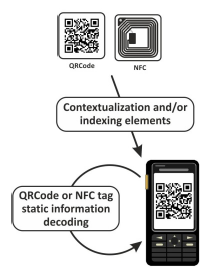 To bridge this gap and the fact that there is no GPS signal indoors (e.g. museums), there are other technologies such as QR Code or NFC tags, that allow a closer interaction with the tourist, which not only have a smaller scope, but also allow only-spreads information to those who request it, being an interaction-aware logic-of-use, as illustrated in figure 2.

This century saw an unprecedented increase in the number of users, applications and mobile networks available. The proliferation of mobile devices with increasingly technological features are enabling applications that can render pervasive computing, allowing that information can be accessible anytime and anywhere and, probably, based on user’s location and context (Bahl, et al., 2002).

Mobile devices and mechanisms for contextualization tear the usual formats, engaging information already inventoried by the central and local - in printed brochures, pamphlets and leaflets, allowing arrives in a ubiquitous manner, contrary to the excessive weight of the costs of the physical devices promotional disproportionate to the current economic situation. It also aims at reducing obstacles, embarrassment, undue delay, responding to pressure from increasing demands and expectations of citizens towards the tourist information services. Contributes decisively to increase the information available to the public, a better organization of the visit, implementing best practices in the sector of tourism information, streamlines endogenous resources, and promotes quality and excellence, a perspective of instrumental nature in the service of a higher goal, which is to inform the public.

The proposed framework aims to be an enabler of innovative ways to provide information and services to tourists and establish itself as a gateway to a business network. This work is currently on development stage where we are creating a prototype in order to validate the proposed framework.

Brown, B. and Chalmers, M. (2003), ‘Tourism and mobile technology’ Proceedings of the eighth conference on European Conference on Computer Supported Cooperative Work.

[2] Department of Informatics and Mathematics, Polytechnic Institute of Bragança, Portugal