THE EVOLUTION OF HOTELS THROUGH ANCIENT GREECE

Hotels appeared in ancient Greece in a primitive form not only as structure but also as service provided. The needs of travellers evolved through the general development and evolution of the societies. In ancient Greece cities were individual states having their own ruler, law and structure. Bonds among them were created to increase the sense of safety among the citizens and prosperity to their everyday life. As the trade offered opportunities for better life conditions, travelling increased in number of people and distances covered. Since walking was a famous way to move along the cities places to rest made their appearance. Despite the primitive character, accommodation changed according to the needs. We meet different forms of accomodation evolution not only as travel evolved but as the society needed. To main holy celebrations in ancient Greece the accommodation provided is different of that in main highways that the trade created. The appearance of inns, taverns or luxurious hotels and their development is presented based on the term hospitality and its meaning through time.

Conceptual approaches of the term hotel

Hotel history has the same age as human civilisation. Three phases are recognizable when dealing with hospitality through ancient times. The First phase has to do with difficult times when danger and difficulties limited travelling alone.

The first phase is connected with the time when foreigner was a rare phenomenon. So when a visitor reached habitable place everyone sought his company that gave a social value. Meanwhile locals and foreigners shared information to military, cultural and practical issues that had great importance. So foreigners were considered by far the most popular with the locals.

As time was passing by (second phase), the number of foreigners increased. While the increase of the offer made the demand to lower in number. When foreigners became a lot the interest in them was gone. It was not a positive discrimination foe a local to host a foreigner as there were many seeking accommodation. Meanwhile information from foreigners were no longer unknown since other foreigners have already spread them to the public. Then the state has to deal with the accommodation of travellers.

In the third phase and when the foreigners became, especially to some areas or seasons, a lot in number they had to pay to secure a place to stay. Through this procedure hotels were born. (Laloumis, 2014)

Today tourists move around the globe in millions. Trading hospitality has reached scientific dimensions as tourism has been a social and economic phenomenon of great importance as for the receiving countries or the ones that export tourists.

In ancient Greece hospitality was a holy act. Foreigners were protected by Zeus Xenios the “strangers’God”, Athina Xenia among the Gods of ancient Greece. There was a divine request for treating foreigners and it would be a sin to act differently. Hospitality followed a typical procedure to each and every foreigner indifferently of his social status he could stayed in the guest room. Hospitality has important social power as it would connect people from different social status even simple people and kings.

In Homer era, a foreigner could find hospitality, in each house he visited. This phenomenon was met to each of the cities – states of the time, although Thessalian and Athenian were more popular among others for their hospitable feelings. Foreigners during Homer era was not a tourist but a messenger, traveller, exile etc

The acceptance of a foreigner was met by gifts and wishes for well being. At his appearance the owner of the house was called hotel owner and gave dinner to his honour. (Gkiokas, 1999)

At early historic times transportation was developed and so did trade. The cities and the societies were thriving as well as science and art. Travels took a more massive figure specially during races and celebrations.

Greek cities, during celebrations, or sport events representatives of other cities were coming apart from the visitors of the events. Then by the interference of the state, hospitality was given to certain people representing the city and the term of public hospitality made its appearance. Public hospitality created powerful bonds among the cities having as a result the necessary conditions of mutual hospitality.

The safety of the foreigners was given to consuls as a responsibility. The consuls were assigned to their position by the authorities of the cities and a special consent was signed. The term of consulate appeared (Koumanis, 2005).

The term of consulate and consuls grew under the establishment of money as exchange means but also from the development of writing records that led to the circumstances of mutual friendships among cities. The treats of friendships were carved to marble columns while consuls were exchanging symbols of mutual respect.

At that time the word hospitality was used to express friendship. Gradually the bases of an international form of law began to establish among the cities – states.

Public and private hotels made their appearance under a form of shebeen or inns.

Shebeens were built next to temples where races and celebrations were made like ancient Olympia, Epidavros, Delphi etc. Most of them were three floor stone buildings and the capacity reached a hundred rooms and two hundred beds like in Epidavros, or Leonideo in Olympia. The profession of the “explanatory” appeared as an ancestor of today’s travel guide. At the time shebeens were not notorious and had the sense of finding shelter for the night (Psimennos, 2001).

Inns were private and profitable contrary to shebeens that were mostly public ones. Inns met to different categories according to the services offered and the luxury given. Some were bed and breakfast while others provided service according to the traveller needs. The service at first was rudimentary but through time and competition the evolution was great.

Ancient Greeks covered long distances on foot. The distance between Athina – Olympia has been something common to be covered on foot and every five years a huge crowd from many cities around Greece reached Olympia walking. So, gradually inns made their appearance to specific places along the distance in order to make travelling easier.

Rich people of the time used to travel with the company of servants so they could stop wherever they felt like resting and military company for their security. Reaching the cities, authorities took care of their hospitality. Inns had minimum economic activities and the service was poor accordingly. Through time the service became better both in quality and quantity. 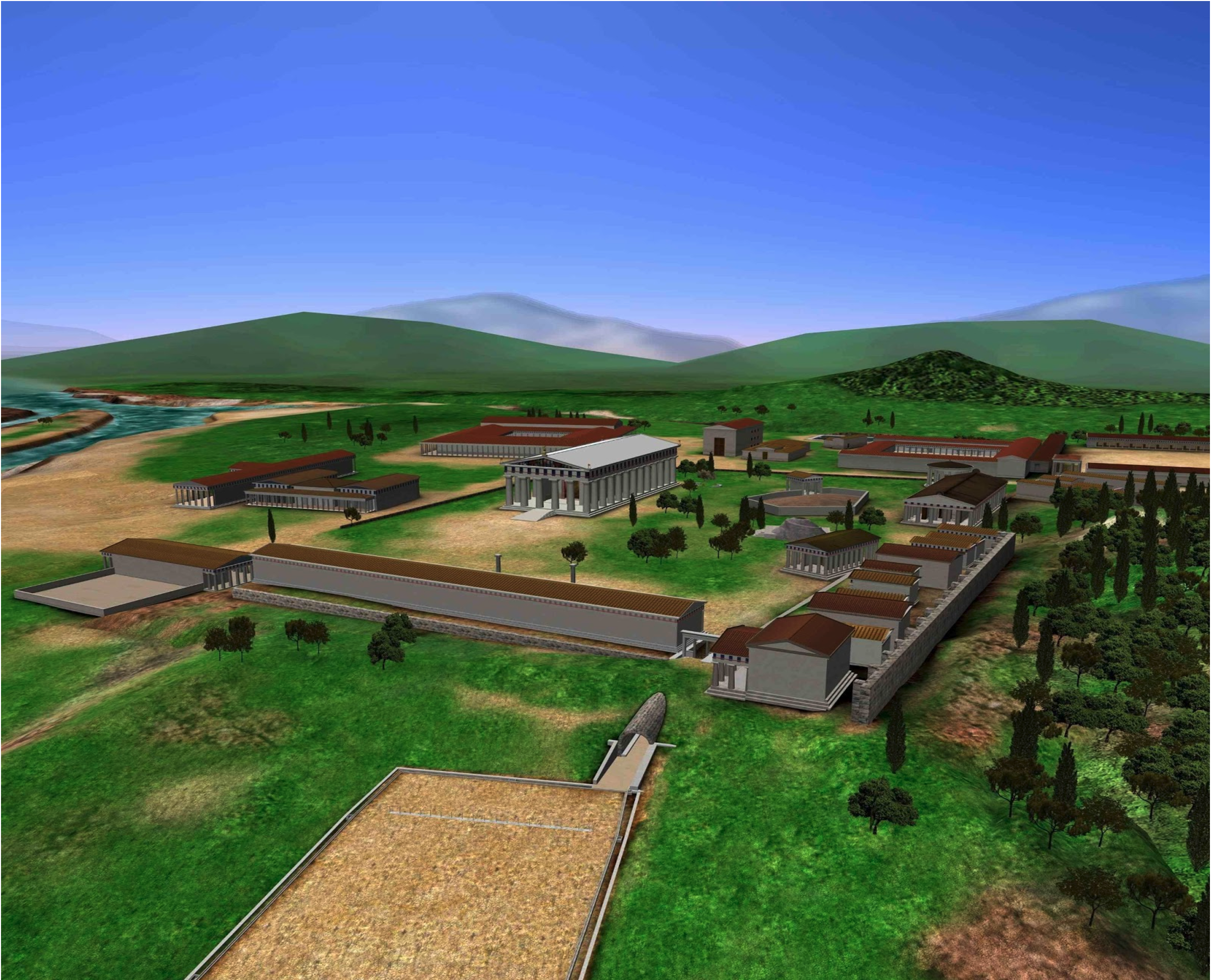 The cost was low but also vague. Travellers used to pay something relevant to the service got to the owner of the inn.

Inns used advertising signs with messages like ‘Foreigner here you will be satisfied’ and labels of the products offered like an animal, a God or other. In ancient Greece attracting customers was really common. Inn owners went to markets and try to advertise their own inn. During the 4th century B.C. in Athena, Piraeus, Corinth but to other cities as well there were a lot of inns. During Dionysos celebrations the demand of accommodation was huge so businesses that rented tents appeared.

A luxury hotel of 3rd century B.C. was a 2 or 3 storey building, decorated with paintings from mythology. At the basement there were large dining rooms decorated accordingly.

In the rooms there were wooden carved beds with Tortuga ornaments and silver or ivory legs. The linen was of the finest quality and the mattresses were painted with porphyry. It was at that time when the profession of the person making the beds that appeared, the servant who had been specialised in the making of the beds.

Ancient Greeks at first were having their dinner sitting where gradually this changed to their lying on sofas covered with cushions while women were still having their dinner sitting. The number of sofas available in each dining rooms named the rooms to double bed, three-bed, seven-bed and nine-bed. In the middle it was located a table for the food served on plated usually silver ones. There were glasses for the men, spoons for the soups but no forks as they haven’t been invented yet. Hands were used instead where they were cleaned mostly with a piece of bread.

There were a lot of servants and superior service. Starters, meat, poultry, fish, salads, fruits and nuts were usually served. Bread was served in baskets. Olive oil and seasonings like pepper, thyme, oregano were mostly used in their cooking. Food was either roast, boiled or fried while the food offered were written on a board.

Lighting during the night came by torches and oil lamps that were hanging from decorated nooks on the walls or carved columns. There were also musicians to accompanydinner 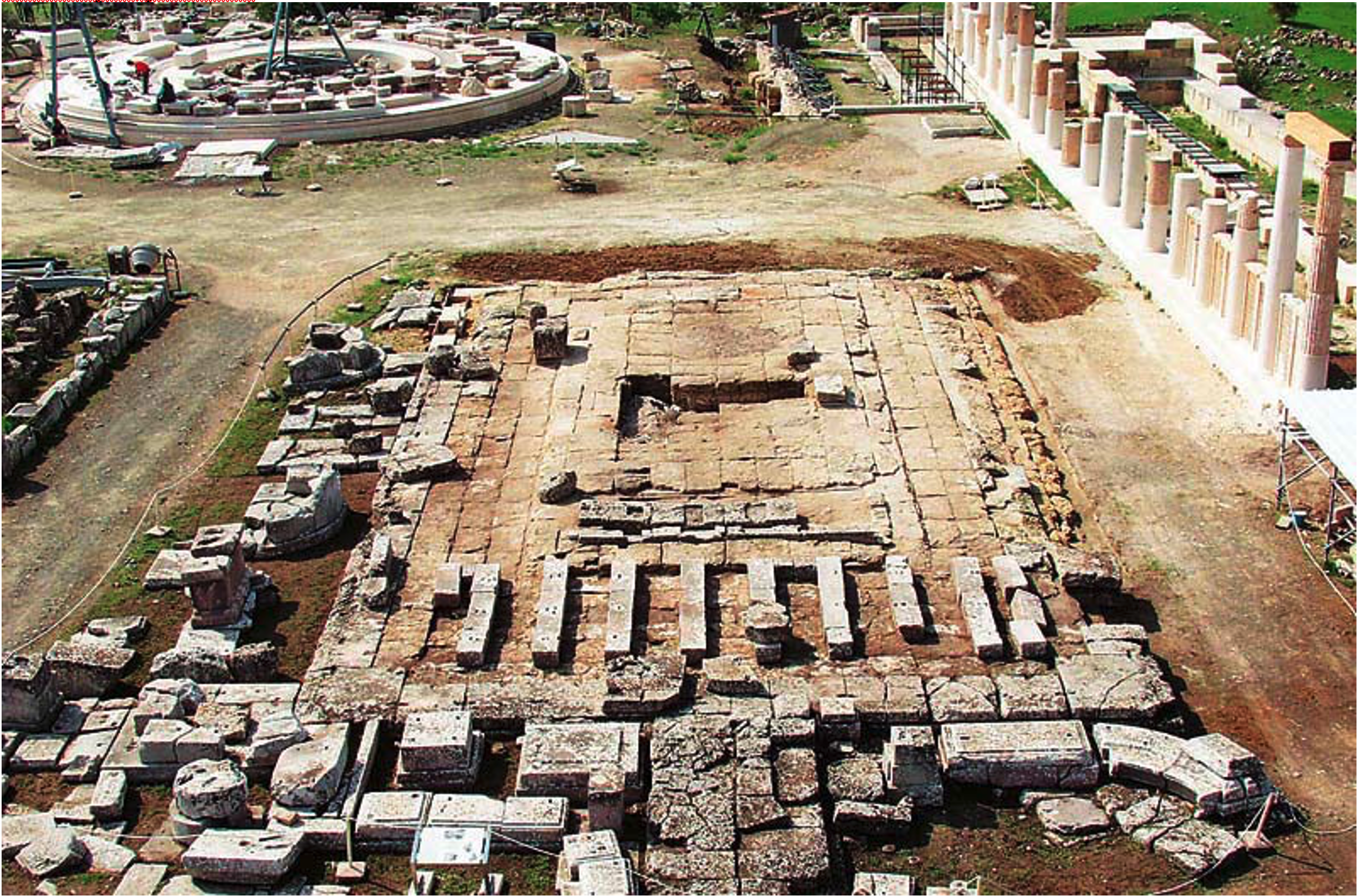 .Photo 3. Asklipiion in Epidavros (what is left)

Tip in Ancient Greece had the same role as today, it was a gentle movement to secure a better service.

Not all hotels were luxury though. There were a lot where the beds were wooden and simple just as the whole building and facilities it provided.

Taverns were at first places where wine was offered with food. The main product offered was fun in general. Gradually according to the demand the offer developed also offering more and better service with accommodation as well.  Customers of taverns usually drank to their limits and loose female company was usually present. The Romans called the taverns campona and ganea. Most were equipped with tables and chairs although se general atmosphere was dirty and noisy. Owning a tavern as a profession had a sense of thief, as the word in Greek has the same root as the monger. Taverns had many similarities with inns so confusion prevailed having as a result to give a notorious fame to the inns as well (Laloumis, 2014).

Another type of hotel were the Romans ‘Diversorii’ that were located along the famous Roman highways and were close to post stations that provided military security.

In Byzantium there were a lot of inns, taverns of different categories. Their form had suffered changes through time and their food offered was a mixture of Greek, European and Asian although wine had not lost its superiority. The conditions were of medium standards and totally different from the luxurious ones in ancient Greece.

Istanbul was the most famous trade place of the world with masses of foreigners reaching the city from Asia, Europe and Africa. The available accommodation could not cover the demand. The church created guesthouses that were mostly charitable ones. They were operating as houses for the poor, hospitals but also as hotels. The need for accommodations to the relatives accompanying patients located them next to hospitals or at times next to famous highways to offer bed and breakfast to travellers or the poor (Kolonas, 2014).

At that time hospitality once again took a spiritual virtue. Many philanthropists built guesthouses while kings offered sponsors. Well known guesthouses of the kind were “Vasileiada” of king Vasileios the Great in Caesarea in 372A.C, “Sampson’s Guesthouse”, “Isidoros” and “Arcadian” built from king Ioustinianos. Guesthouses were located through Byzantium but mostly along the way to Holy Land. After the fall of Istanbul in 1453A.C. the guesthouse were evolved to caravan stations ending the long history of guesthouses as they were. Even today hospitality tradition without profit is still provided to the special place of monasteries, the abbot’s room where a monk is responsible for the hospitality provided.

It has been proved that the hotels have been sites of civilization, as the degree of quality functionality goes to the same parallel with that of the cultural level of the era per location. In ancient Greece hotels have been operating in quite a quality facilities giving services accordingly setting the foundation of the hotel industry as we know it today.

Kolonas V., 100years of hospitality, The hotels of Thessaloniki, 2014