Our seasonal work experience in the service sector, as well as our student experience in accounting, statistics, mathematics, and economics, led us to study a subject, combining many of the aforementioned aspects, which is  a field study on the marine park of Alonissos, Greece, based mainly on the knowledge we have gained from our University studies. We have structured our material in a way that it is more scientific and more understandable to anyone who chooses to work on the same subject in the future. Our goal is to showcase the attitudes and predispositions of the local people towards the marine park.

The population of Alonissos is about 2.750 people, according to the 2011 census. The residents’ main occupations are agriculture and livestock farming. The landscape mostly constitutes of steep cliffs which end to the sea as well as caves which form the main habitat of the Mediterranean monk seal (Monachus monachus). The climate is Mediterranean with rainy winters and dry summers. The average annual temperature is 17° C, while the average annual rainfall is 515 millimeters. The topology, morphology, and excellent condition of the natural environment make the “Marine Park” an ideal habitat for many endangered species of the local land and for marine flora and fauna. The area is home to a great variety of bird fauna, reaching approximately 58 species. Regarding its flora, there are Mediterranean conifers in the area, such as the rare Amelanchier chelmea tree, and other interesting native plants, such as the Campanula reiseri, Campanula rechingeri, Linum gyaricum, Areanaria phitosiana, etc.

The main ecosystem in Alonissos is that of the “National Marine Park”, where ¼ of the world population of the Mediterranean monk seal is found. The presence of seals and dolphins in the region is often the reason why people visit Alonissos. However, it should be noted that people are prohibited to approach the areas where seals live i.e. the islands of Alonissos, Peristera, Kyra Panagia, Psathoura, Piperi, Skatzoura, and Gioura. In general, this region constitutes the largest protected area in Europe. It is clear that tourism to the marine park should be considered of “special interest”, and it is this special interest which determines why the visitors choose this destination, as well as the activities in which they will engage and the restrictions with which they will comply, as enforced by the Park. (Sotiriadis M.,Farsari, I. 2009).

2.       The Institutional Framework of the National Marine Park of Alonissos

3.The Goals of the National Marine Park of Alonissos

The main purpose of the National Marine Park of Alonissos is to preserve the population of the Mediterranean monk seal, an endangered animal species due to tourism, over-fishing, and pollution, factors which reduce its food sources and destroy its habitats. (Krippendorf, Jost 1988).

The establishment of the marine park is a significant step on the local and international level to protect the “Monachus monachus” seal, as well as other rare and endangered species, in relation with the plan to protect, preserve, and manage wildlife, the natural environment, cultural heritage (Karagianni, Maria 2017), and natural resources. [Hellenic Society for the Protection of the Environment and Cultural Heritage (2015).

The National Marine Park does not constitute a restricted area in its entirety, but there are restrictions as to where visitors can circulate who must comply with the regulations established to protect this unique ecosystem, and in particular, the Mediterranean monk seal (Monachus monachus). www.agnanti.gr

The legislation governing the park includes the regulatory measures and the general management framework of the region such as the Common Ministerial Decision No. 621/23537/2003. The basic feature of the organization of the park is its division into two main protection zones (A and B), as can be seen in the picture below. 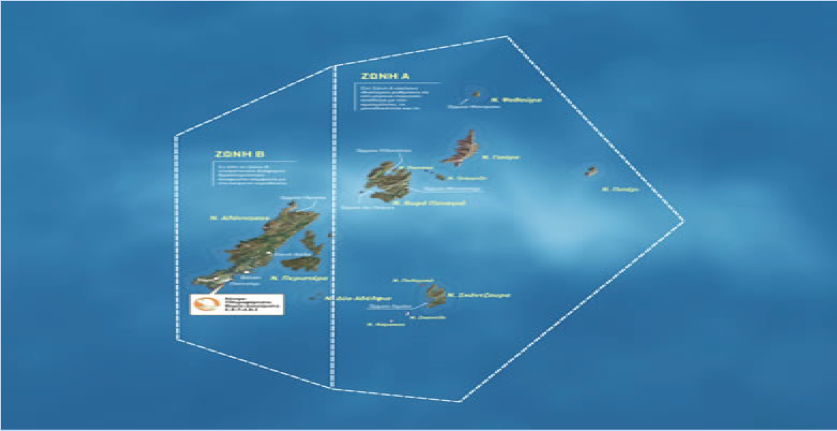 4.1. Zone A is a strict protection zone, and the regulations governing its individual areas vary depending on how critical the condition of the area is, i.e. its uniqueness and its naturalness. In order to enter this zone, you must be granted a special permit by the Management Body. Hunting is forbidden, and there are special regulations in place regarding professional fishing (both coastal and distance). Recreational fishing is also regulated, while the use of fire, free camping, and speargun fishing are forbidden throughout the park. Zone A includes the islets Peristera, Kyra Panagia, Gioura, Skantzoura, Psathoura, and Piperi, as well as 22 unnamed rocky islets and reefs.

4.2. There are no particular regulations in place for visitors in Zone B, except for free camping and the use of fire in certain areas, which are forbidden as it was aforementioned. Regarding the speed of boats, there are special regulations on recreational and professional fishing which are independent from those of the national legislation

4.3. The Islets of the National Marine Park of Alonissos

Peristera: An uninhabited islet, yet visitors still ought to show the appropriate respect and carefulness and act appropriately, especially in the area of the shipwrecks (mooring). (Athanasiou, Lakis 2007).

Gioura: An islet of exceptional beauty, where the mythical “Cave of the Cyclops” can be found. It is home to a great variety of bird fauna, including a few pairs of birds of prey, and it has been declared a protected area for the protection of the Mediterranean monk seal and for scientific research. (Sampson Adamantios 1992).

Psathoura: There are certain species of flora found on this islet that are unique in the whole marine park, including the sea daffodil (Pancratium maritimum) and the yellowhead or yellow fleabane (Inula viscosa).

Piperi: It lies at the heart of the marine park and constitutes an area of strict protection. It is forbidden for any boat to approach the area unless they have a special permit. The purpose of these restrictions is to protect the habitat of the Mediterranean monk seal, as well as the birds of prey which live in the inaccessible rocks of the islet. There are up to 33 species of bird fauna in Piperi, and it is estimated that the islet is home to a significant number (350-400 pairs) of the Eleonora’s falcon (Falco Eleonorae).

Skantzoura: This islet constitutes a habitat for the Auduin’s gull (Ichthyaetus audouinii), which is among the endangered bird species. This bird lives exclusively in the Mediterranean, and its global population is approximately 2.000 pairs.

There are daily trips for those islands in Zone A which are open to the public. (Mylonopoulos Dimitrios N. 2005).

Many marine parks are internationally established and exist under legal protection, as their objective is to protect and preserve marine ecosystems. Controlled tourism is a modern form of tourism, characterized by pleasure derived by visiting special interest destinations of certain standards and under certain conditions; (Bonarou, Ch. 2012) this form of activity creates an important psychological value along with the characteristics of being a tourist/visitor. (Page, Stephen J. 2006). Furthermore, our wish is to highlight some of the environmental problems resulting from this form of tourism, such as unclear liability in cases of accidents that lead to water pollution, pollution of the underground aquifers, and how addressing these problems is related to the distinction between public and private goods, bringing the role the state plays and the rights and responsibilities of the citizens to the fore. (Kokkosis, Ch., Tsartas P. 2010).

6.      The Instance of an Outing of a “Monachus monachus ” seal called Nepheli

Nepheli, a “Monachus monachus” seal, went out for the day! She sent messages/signs even from inside the caves – although signals from the transmitter are prevented from reaching the recording base in there. According to the message Nepheli sent on 10/3, she spend her morning (00:00 – 06:00) fishing at the east side of the islet of Piperi, diving to 109 m. At 06:00, she went and rested in one of the islet caves, and she resurfaced once again at 12:00 to move around and dive, this time to 102 m. She then swam at the north side of the islet Kyra Panagia. Her course is recorded above.

Looking into the answers to the anonymous questionnaire, we can see that men were more willing to cooperate than women. Furthermore, the respondents between the ages of 30 and 40 were more cooperative, and also those who had a university level of education, approximately ¼ of the respondents. We also found out that ¼ of the locals did not know the conditions under which the park had been created, and claimed that it is worldwide known that the “Monachus monachus” seal is an endangered animal species, although we should not forget that the purpose of the park is also the protection of other rare and endangered species of the flora and fauna of the island.

The development of the area should take place with the right use of the natural resources. The park is not a closed area; it is an extensive, protected area of approximately 2.200 km2 in size. The philosophy of the Park is to protect the ecosystem, as well as help the development of Alonissos, which is the only inhabited island of the Park, without any violent interventions. (Vlaikos, Giannis 2010). When asked if they support the presence and operation of the park, 15% of the local people said they do not, while an equivalent percentage said that the presence of the park has not positively affected their everyday activities. On the contrary, 90% of the locals believed that the presence of the park has increased the tourist activity in the area.

When asked if the regulatory measures regarding the protection zones of the park are observed, 20% of the respondents said that they are not, although we definitely know that the particular regulations and restrictions imposed in every such area do not exist in theory only, nor do they constitute “good will exercises”, but they are tactics applied that are decisive for the preservation of the ecosystem. The following question was whether the establishment of the park has helped to preserve the rich marine diversity of the area, to which 90% of the respondents answered that it has.

To the final question: Do you believe in the institution of the Management Body of the park? ¼ said they did not, although it has been widely accepted that the participation of the Management Body has contributed to the financial growth of the area, at least according to the general principles and goals of the Management Body. The Management Body is responsible for the management and daily operation of the marine park, therefore, its successful protection forms part of the Body’s mission. Furthermore, it should be noted that the daily operating schedule of the park directs the field actions necessary for its successful management. In addition, the daily operating schedule is formulated by the scientific and technical staff of the Management Body, in collaboration with non-governmental organizations, Universities, public institutions, professional organizations, and the local community. Therefore, the park is more than a delimited geographic area; it is a dynamic system, acting and being acted upon. Words are insufficient to describe the results. It is a complex situation, protecting the nature, the ecosystems, and the vulnerable habitats of the area in question.

We believe that the active involvement of the local community in the care and preservation of the marine park, in accordance with its rules of operation, will be positive for the collaborating entities, the academic community, non-governmental organizations, and other active citizens. The Marine Park, as an ecosystem that encompasses various rare fauna and flora, should be protected to the extent possible, and everyone must understand its importance. In particular, local people should be convinced to show the required ecological behavior and awareness. Coordinated efforts of all parties involved will result in the preservation of the Marine Park to the benefit of the environment and nature in general. 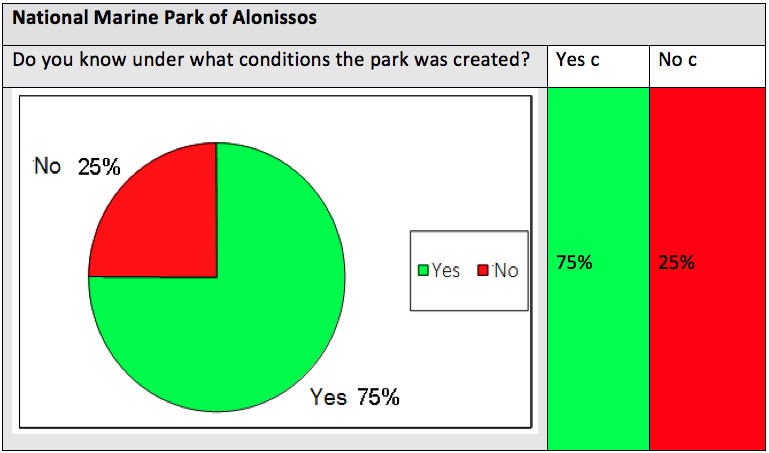 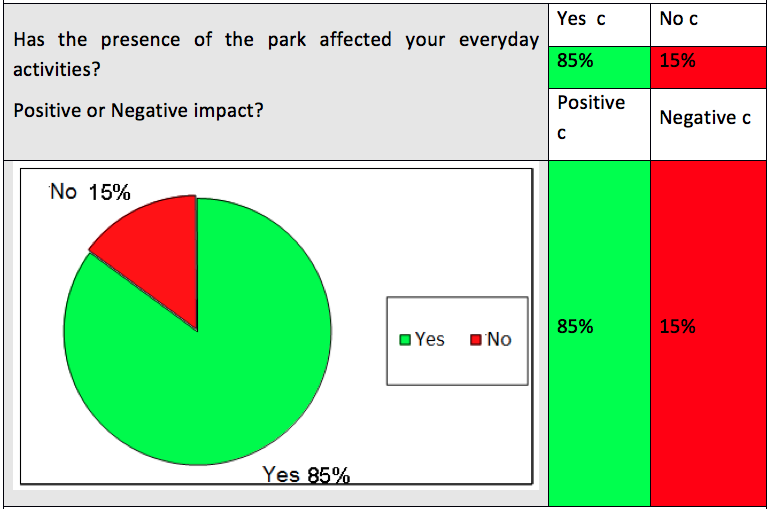 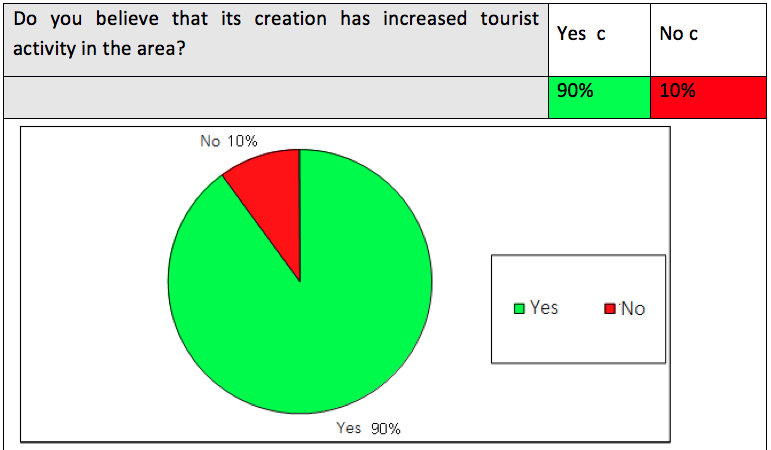 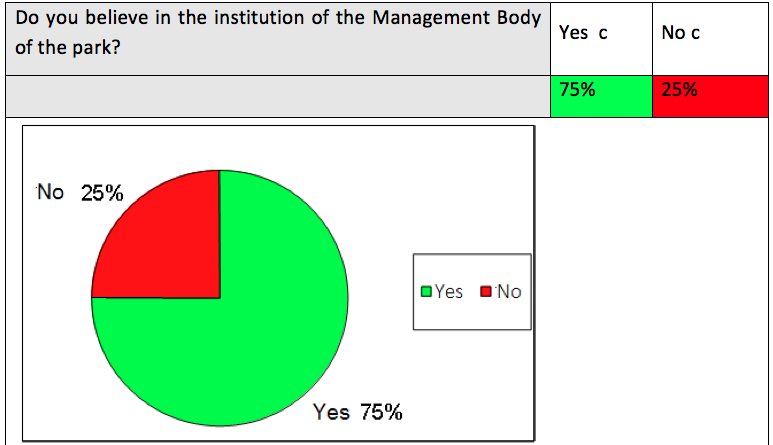 Hellenic Society for the Protection of the Environment and Cultural Heritage. (2015). National Marine Park of Alonissos, Northern Sporades

Sampson, Adamantios. Excavations at the Cave of the Cyclops in Giouria during the year 1992.

Vlaikos, Giannis (2010). President of the Ecological and Cultural Movement of Alonissos and Alternate Member of the Management Body of the National Marine Park of Alonissos. Article published in the Northern Sporades newspaper on 26.01.2010.