The paper attempts to explore the parameters that influence the demand for money through bibliographic review, data collection and analysis. It answers queries based on statistics, scoreboards and comments on results. It compares the Eurozone (due to its importance to Greece) with the USA and draws conclusions following the empirical investigation of the particular data. At the same time, it detects the demand for money which is a key element in the investigation of the economies of all countries (European and non-European), since its course and its determinants shape the monetary policy and the economic system of a society which affects even the tourism industry.

Since the late 1970s, when economists in the US and other advanced countries were unable to explain the real growth of the sum of money through the money demand function, they have dealt with extensive studies of the demand for money. For example, in the money demand for trade facilitation, people and enterprises have retained and still retain a certain part of the income in the form of money for trade, since the proceeds do not necessarily coincide in time with their payments (Petraki Kotti, Α. & Kottis, G., 1988). However, in general, the economic concept of demand refers to the quantities of a commodity that consumers are willing and able to purchase at different prices over a given period of time. (Wilson & Clark, 1999).  Observing the general context, in our opinion, the causes and the solutions of the volatility of money demand deepen the overall perception of the demand for money, and then the emergence of new methods for econometric analysis is reinforced.

In a survey conducted by Sosunov in Russia, the findings showed that an increase in income leads to an increase in demand of 10.9%, while an increase in the nominal interest rate leads to decrease in demand of 4%. Moreover, the findings indicated that demand for money can be affected and stabilized by the introduction of foreign currency cash and the relative interest rate. For the purpose of clarification, it should be mentioned that if foreign cash is included, there can be a coincidence between actual disposable GDP and the opportunity cost of holding money, calculated by the difference in deposit interest rates on time deposits and sight deposits (Sosunov, 2012).

It is difficult to measure precisely the amount of circulating money, as there is no correct or wrong way of measuring. In theory, the quantity theory of money is the sum of the monetary units of any kind held by individuals, enterprises and public organizations for a period of time (Lianos, et al., 2012).  Thus, the US Federal Reserve Bank has created two monetary aggregates, M1 and M2. 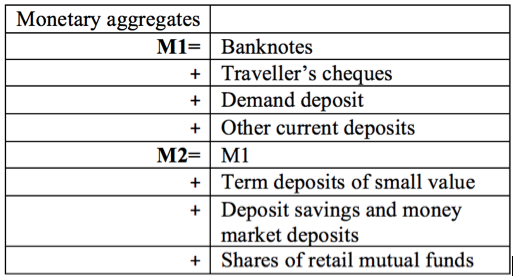 M1, which is the narrowest definition of money, contains only currencies and various deposit accounts on which people can issue checks. These are the most liquid assets in the financial system (Cecchetti & Schoenholtz, 2016). M2 is equal to M1 plus assets used directly as payment instruments and difficult to convert quickly into currency (Cecchetti & Schoenholtz, 2016).

With regard to money supply in the Eurozone compared to the US, the charts below illustrate the situation in these two large federations. In particular, as shown in the chart below, money supply (M1 in million Euro) for the Eurozone has been constantly rising over the years due, of course, to the intervention of the European Central Bank in the countries that still suffer from the financial crisis. The curve shows a straightforward growth, demonstrating an effective monetary policy of the Eurozone system with a peak in 2017 (more than 7 trillion euro) and the minimum in 2007 (about 3.9 trillion euro). 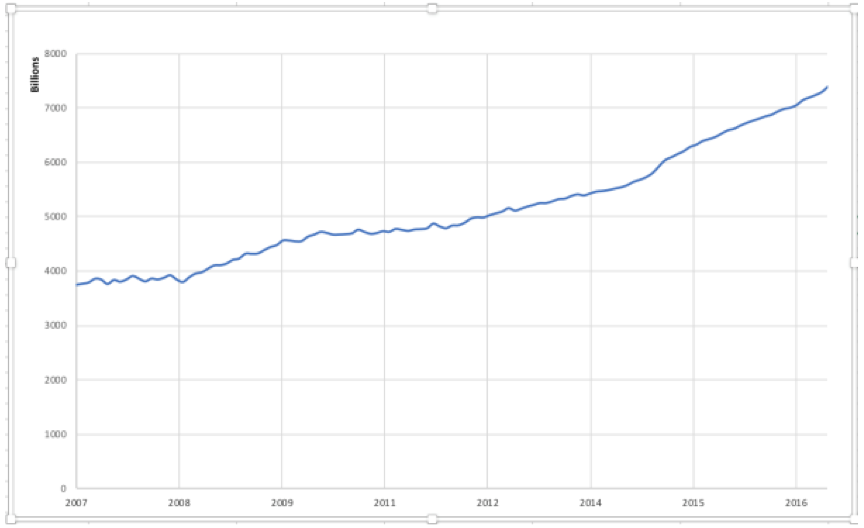 By reference to the results of the Eurozone, there is a constant upward trend in the money supply in the US (M1 in trillion dollars), but with more ups and downs than the Eurozone. 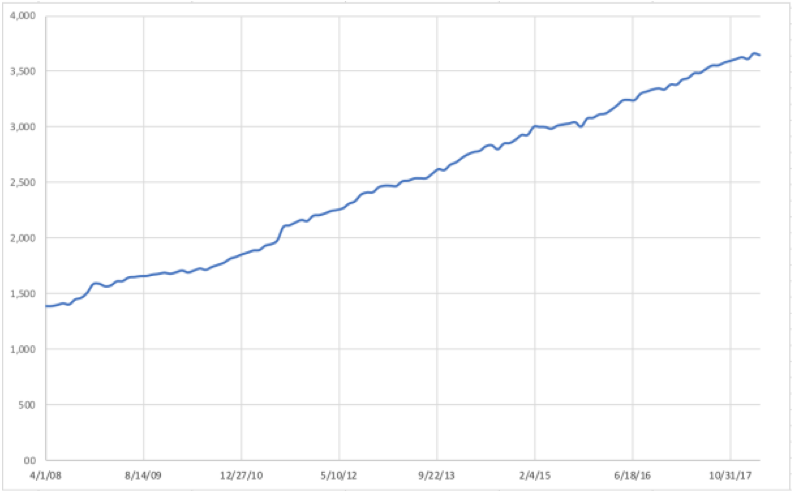 Regarding the inflation rate in the Eurozone and the US, as shown in the chart below and compared to the results of figures 1 and 2, it affects the demand for money especially in the years 2008 to 2012. In year 2008, when the economic crisis started, the inflation rate shows wide variations and differences (negative inflation). Central bank interventions and a prudent monetary policy in the years 2012-2014 resulted in stability and the normalization of disruptions.

A question arises as to whether inflation actually affects the demand for money. According to the quantitative theory of money, the following relation applies:

Figure 3: Inflation Rate in the Eurozone and the USA (World Bank, 2018)

The left part of the quantitative equation refers to the money used for trading purposes. M is the amount of money; V is the transactions velocity of money and measures the rate at which money circulates in the economy. In other words, the transactions velocity of money indicates how many times a dollar “changes hands” over a certain period (Mankiw, 2002). In the short run, factors V and T are fixed, and therefore P depends directly on M. Therefore, the larger the money supply, the higher the price level and vice versa.

However, this relation does not always work, and we should not believe that we can control inflation in an economy with money supply. What is wrong with the relation M*V=P*T is the following:

·      The velocity of money and total production are assumed to be stable over a short period of time, thus, we end up in the relation between prices and money supply. Neither one nor the other is stable either over a short or a long period of time.

·      During an upward trend of the business cycle, M and V are increased, while during a recession, they are both decreased; thus, they do not automatically have an inverse relation. A deliberate monetary policy can cause M to drop when V grows very quickly, but only in the short term. In the long term, V would also decline if monetary tightening leads to recessionary trends.

The Money Supply Situation in Greece

It is observed that M1 money supply in Greece has fluctuated over the last decade, and the curve is not the same as that of the Eurozone or the US. Specifically, it is noted that, at the end of 2009, there was a peak of about 13 billion Euro, while the lowest point is seen at the end of 2012 when M1 was reported at about 8.5 billion Euro. It is worth noting that the fluctuations observed are not accidental. 2010 is the year in which Greece resorted to the support mechanism of the European Union (EU) and the International Monetary Fund (IMF). Year 2012, during which there was a recovery after two years of a downward trend, was the year of double elections. In 2015, M1 in Greece dropped again in 6 months, due to the elections, referendums and restrictions imposed on capital movements. In view of the above, it can be concluded that in times of elections and economic uncertainty, money supply M1 shows strong fluctuations. 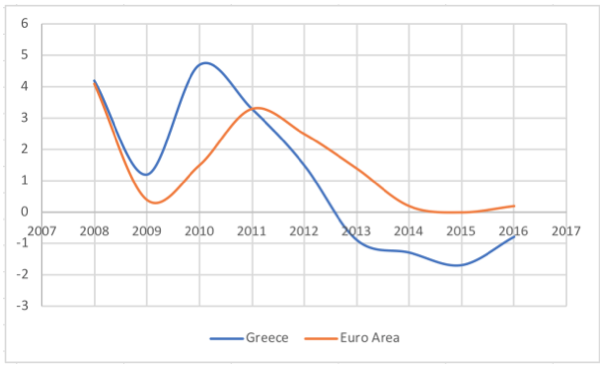 Figure 5: Inflation Rate in Greece and the Eurozone (World Bank, 2018)

As far as inflation in Greece is concerned, it should be noted that it affects the money supply, especially from year 2010 onwards. It is worth mentioning that, since mid-2012, there is a negative rate of inflation, which, in conjunction with Greece's debt, it is not considered financially a good combination and a positive indication of the course of the economy.

Demand for money is a key element in exploring the economies of all countries (European and non-European), since its course and its determinants shape the monetary policy and economic system of a society. The stability of the demand curve, either referring to M1, M2 or M3 values, as well as the factors affecting it, varies depending on the country but also on the timing in that particular country.

Finally, it should be pointed out that after comparing the Eurozone with the US, monetary circulation (M1) for the Eurozone in recent years has been at the same level as that of the US, where money demand curves follow a constant upward trend, largely affected by the interventions of central banks, both in the supply of money and interventions in interest rates, but to a lesser extent in the inflation rate.

Sabade, S. (2014). 'Is money supply the cause of inflation in India? An alternative postulate to understand inflation', Procedia Social and Behavioural Sciences, issue 133, pp. 379-382.